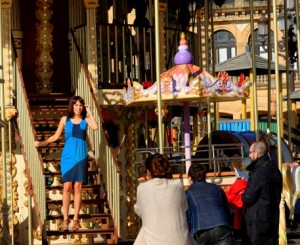 According to HubSpot, photographs are becoming increasingly more important in web design. No one knows that better than Shutterstock, which offers more than 30 million images that have been downloaded over 350 million times as of 2013. Web design careers will require designers to stay abreast of the current trends in photographs for web sites, which Shutterstock discusses in its third annual report on global design trends. The most significant findings in that report include the growing popularity of filtered photographs and flat design in website design for 2013.

Universal trends in web design include trends that hold true regardless of your geographical location, such as the increased use of filtered photographs. This trend is primarily due to the current popularity of mobile devices with cameras and mobile applications that use photographs. Searches for Instagram-like images increased 661 percent, and downloads of flat-design images increased 200 percent in 2013.

The trend towards UI design also resulted in Shutterstock adding almost 170,000 of these images in 2013. Another universal trend for 2013 was the increased demand for images of real life settings, which increased 347 percent in 2013. This trend reflects the growing trend for portraying emotional connections in web design.

Images of landscapes and vibrant colors became more common in 2013, especially in social media. Typographic quotes and an increased depth of field were also significant trends in social media during 2013.

Some trends in web design are specific to particular countries, such as the prevalence of traditional floral patterns in Japanese web sites. Web sites in the United States tend to show images of business and technology, while Canadian sites tend to favor conceptual icons. Sites in the Netherlands often use images with vibrant textures and Russian designers frequently show vivid colors on their websites. Brazilian sites tend towards images with geometric patterns and Chinese sites favor pastel colors.

Shutterstock customers performed a total of 11,340 downloads in 2013, reflecting the increasing influence of illustrations, photographs, vectors and videos in web design. Searches on the search term “Gatsby” increased 625 percent in 2013, due to the release of the major motion picture “The Great Gatsby.” Searches on “3-D printing” increased 581 percent, primarily because of the trend towards creativity in website images. “Makeup sets” was a popular search term that increased by 503 percent due to the timeless nature of beauty products and the global popularity of “International Women’s Day” increased the use of this search term by 491 percent in 2013.