Once you’ve worked a few film editor jobs, you start to develop an eye for all the weird details in movies that stick out, the editing gaffes, the foul-ups, and the weird editing choices that don’t quite work. Some of them are more obvious than others, some of them will go unnoticed by the untrained eye, and some of them prove that there’s a fair amount of “wiggle room” when it comes to editing video. 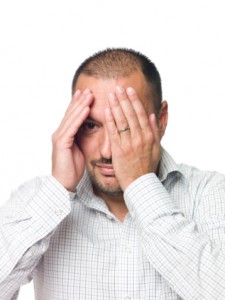 Take for instance a shot in the 1980’s classic The Goonies. Robert Davi plays an Italian criminal with a passion for opera and a tendency to burst into song at the strangest of times. In one scene, the young “Chunk” is confronted with Davi face to face when he approaches a car on the freeway. He realizes he’s facing off with the bad guy when he bursts into song. We see a shot of Chunk backing away from the car while we see Davi in the rearview mirror in the foreground, mouth closed around a cigarette as his operatic singing plays on the soundtrack.

Now, either he’s just been lip syncing this whole time, or the editor missed a crucial detail.

The film’s editor, Michael Kahn, is one of the most accomplished and inspired editors in the business, so it’s odd that he would miss such an obvious detail. So what does this teach us about editing?

First of all, that even the worst editing gaffes often go unnoticed. The humor of the scene shines through because you’re not looking at the rearview mirror for more than a second before your attention turns to Chunk’s panicked expression. Great editing can save bad acting, but great acting can save an editing misstep all the same.

It’s more likely that an editor like Kahn would notice this inconsistency, and then go with that shot anyways, because it was the funniest take.

Scorsese’s Casino features a moment in which Robert DeNiro is holding Sharon Stone, and you won’t notice it the first dozen times you watch the film, but somebody offscreen bumps the camera, and there is a noticeable jolt. Nobody talked about this when the film was released; all they talked about was Stone’s career-best performance. Scorsese and his editor Thelma Schoonmaker must have had another take on hand without the camera bump, but also without such a powerful performance from Stone and DeNiro. Sometimes perfect is the enemy of great.

Go through your favorite movies and pick out all the goofiest editing gaffes, all the most obvious flubs. Chances are that you’re going to need to watch them all about a hundred times before you can pick them out, because the power of good filmmaking means that you don’t notice the little things.

When putting together a video marketing strategy, it’s important to work with an editor who is an artist as well as a craftsman or woman, because sometimes you have to go with what’s technically imperfect, but emotionally and artistically right on the money.

Gilbert S is a freelance writer available on WriterAccess, a marketplace where clients and expert writers connect for assignments.