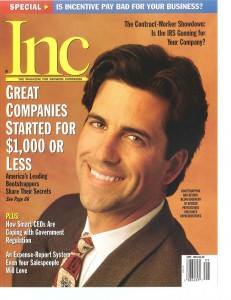 After being named one of the 500 fastest-growing private companies in America, a year later Artisan Talent CEO Bejan Douraghy appeared on the cover of Inc Magazine. He discussed how bootstrappers can change their business practices to foster growth and move beyond the start-up phase.

Within five years, Artisan tripled in size and was named one of the fastest-growing private companies in America in Inc. magazine. A year later, Bejan appeared on the cover of Inc Magazine, discussing about how bootstrappers change their business practices to foster growth and move beyond the start-up phase. It would be harder now to call him a bootstrapper, but he has not forgotten what he has learned. Bejan’s revolutionary approach to the industry has helped him continue to achieve success and garner attention along the way. He was selected as one of 2008’s Ernst and Young Entrepreneurs of the Year. He also appeared on a sponsored segment of Worldwide Business with kathy ireland®.

Bejan holds a Bachelors degree from Syracuse University and is a member of Vistage and Entrepreneurs’ Organization (EO). He has participated in three Chicago marathons and Accenture triathlons; and has been practicing Wing Chun, a form of Kung Fu, for over 20 years.